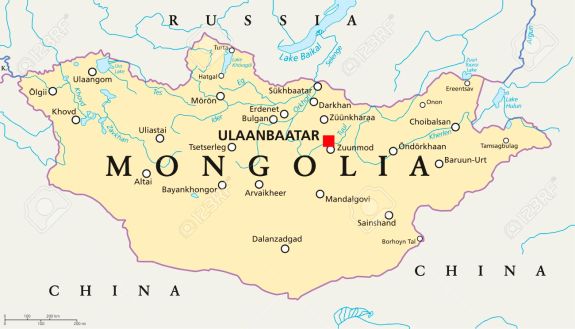 Greetings in the name of our Lord and Savior Jesus Christ! We hope that you are enjoying this autumn season.  Soon, the fall foliage will be here in all its splendor, reminding us of our Creator God who changes the times and the seasons. May you also be reminded of His faithfulness in this beautiful season of the year.

In this prayer letter, we would like to focus on one of the countries that FEBC serves, Mongolia, since much of David’s recent work has been with this country.

Mongolia is a landlocked country in East Asia. It is sandwiched between China to the south and Russia to the north. At 603,909 square miles, it is the 18th-largest and the most sparsely populated country in the world, with a population of around 3 million people. The country contains very little arable land, as much of its area is covered by grassy steppe, with mountains to the north and west and the Gobi Desert to the south. Ulaanbaatar, the capital and largest city, is home to about 45% of the country’s population.

Approximately 30% of the population is nomadic or semi-nomadic; horse culture is still integral. The majority of the state’s citizens are of Mongol ethnicity, although Kazakhs, Tuvans, and other minorities also live in the country, especially in the west. Mongolia joined the World Trade Organization in 1997 and seeks to expand its participation in regional economic and trade groups.

The area of what is now Mongolia has been ruled by various nomadic empires, including the Xiongnu, the Xianbei, the Rouran, the Turkic Khaganate, and others. In 1206, Genghis Khan founded the Mongol Empire, which became the largest contiguous land empire in history. His grandson Kublai Khan conquered China to establish the Yuan dynasty. After the collapse of the Yuan, the Mongols retreated to Mongolia and resumed their earlier pattern of factional conflict, except during the era of Dayan Khan and Tumen Zasagt Khan.

In the 16th century, Tibetan Buddhism began to spread in Mongolia, being further led by the Manchu-founded Qing dynasty, which absorbed the country in the 17th century. By the early 1900s, almost one-third of the adult male population were Buddhist monks. After the collapse of the Qing dynasty in 1911, Mongolia declared independence from the Qing dynasty, and in 1921 established de factor independence from the Republic of China. Shortly thereafter, the country came under the control of the Soviet Union, which had aided its independence from China. In 1924, the Mongolian People’s Republic was founded as a socialist state. After the anti-Communist revolutions of 1989, Mongolia conducted its own peaceful democratic revolution in early 1990. This led to a multi-party system, a new constitution of 1992, and transition to a market economy.

The majority of Mongolia’s population is Buddhists. The non-religious population is the second largest group. Islam is the dominant religion among ethnic Kazakhs. Christianity in Mongolia is a minority religion. As of 2005, the United States Department of State reports that approximately 24,000 Christians live in Mongolia’s capital, Ulaanbaatar, which is around 2.5 percent of the entire registered population of the city.

Most Christians in Mongolia became Christian after the end of Mongolia’s communist regime in 1990. According to the Christian missionary group Barnabas Fund, the number of Christians grew from just four in 1989 to around 40,000 as of 2008.

Most Christians in Mongolia today are Protestant, and most have become Christians since Mongolia’s transition to democracy in the early 1990s.

For many years, FEBC had to depend on shortwave broadcasts to bring the Gospel to the people of Mongolia.

But in 2000, FEBC was given permission to build a Christian radio station in the capital city of Ulaanbaatar – the first Christian radio station in the country, known locally as WIND-FM. In early 2003, a devastating fire destroyed the station, but it was rebuilt and went back on the air in 2008. WIND-FM has received several accolades through the years including the 2016 NRB Media Award for International Radio Ministry and a commendation from the Mongolian government. A total of 10 stations have now been built giving the network a potential listening audience of around 1.5 million people, representing over half the population. More stations are planned in the coming years so that everyone in Mongolia will have a chance to hear the Good News of salvation through Jesus Christ.

Our broadcasts in Mongolia are having a tremendous impact in the lives of listeners such as 24-year old “Batchimeg” from Nalaih:

“I am Batchimeg…I live with my family in Nalaih town, about 45 kms from Ulaanbaatar. I have been a believer for 15 years and I listen to FEBC programs daily. The biblical teaching programs are a blessing and encouragement to many believers, because these programs talk about the one and only true God. I always pray that many others will come to know Him as well, like my family does.”

Please pray that many more people like Batchimeg will come to know Jesus through FEBC’s ministry in Mongolia. Pray for the Lord’s anointing on our programmers. Pray for David as he works with the local technician to resolve several technical issues. Finally, please pray for wisdom and guidance for David & Vicki as they make plans for travel to Mongolia in November. More items for prayer can be found in FEBC’s monthly “Prayer Target” which can be found at:

In closing, we want to thank you for your faithful support of our ministry through your prayers and gifts.  Truly, you are a partner in taking “Christ to the World by Radio and Media.” If your church or Sunday School Class would like for us to come and speak about our ministry, please contact us. Thank you, and may God bless you!

To support the ministry of the Creels